According to the Oxford Dictionary, a white elephant is “a possession that is useless or troublesome, especially one that is expensive to maintain or difficult to dispose of.” I hadn’t heard about this idiom until my visit to Conejo in Colombia. It all started when the Siemens Stiftung and MIT D-Lab decided to test their co-design methodology around technology, in particular around the implementation of technology.  We chose the Co-Design Summit in Conejo as a pilot for our amended methodology and to focus it around the problem of providing clean drinking water to the community.

After a 45-minute hike through the bushes, up the hill and over rivers we found Conejo’s white elephant – an enormous installation of four water tanks, a system for an accumulated 64,000 litres of water filtration. A system using sedimentation and carbon filter to clean all the water for the community. A system that operated for a mere total of four days – eight years ago! After numerous discussions with the locals about their water piping system, the amount of clean water they’d need and the potential affordability of the system, they indicated that they wanted a powerful and clean system similar but more reliable than the white elephant. Longer lasting, but less expensive to operate than the white elephant. 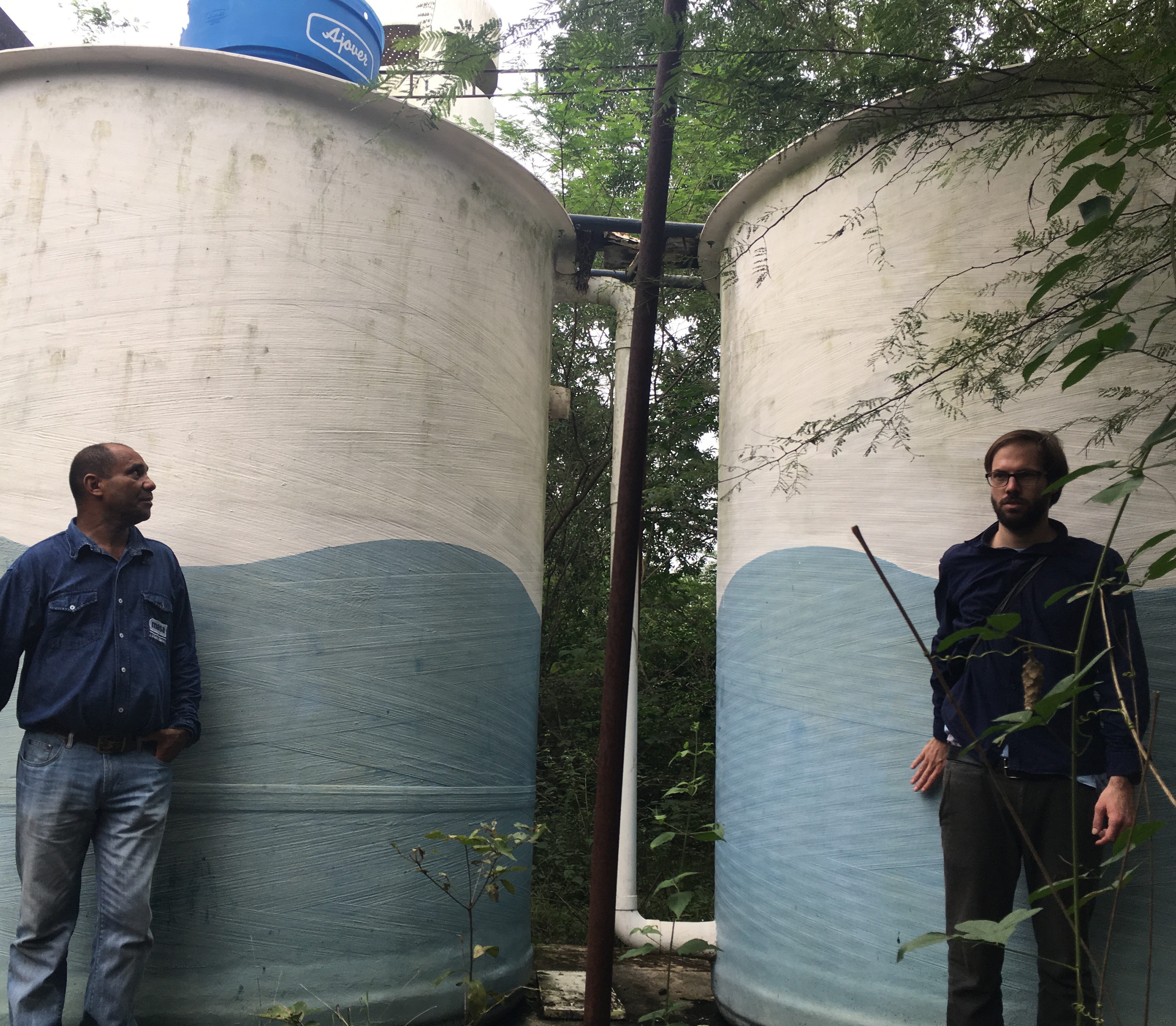 These are just two of in total four water tanks.

The Conejo white elephant is an installation by the Colombian Government that cost a lot of money, involved a lot of energy by locals to build the system, and experienced long negotiations before the installation. But it also came with lots of promises; clean water for everybody, as much water as they want, better health for them and their children. The system worked for four days, afterwards somehow the process broke down, but nobody ever taught the local population how to operate and repair the system. Engineers never came to repair the system and the political leaders have changed since then. Even if the locals could financially sustain the system, they aren’t allowed to work on the system that is still public property.

While we tried to use the amended Co-Design methodology to avoid the same mistakes of implementing systems that can’t be sustained and aren’t owned by the community, we certainly weren’t prepared for the fact that people already had expectations on our systems that had been triggered by an earlier installation done by the government. They wanted what the white elephant had promised them – clean water for everybody, even though such a system couldn’t be sustained by the community. A lot of the work we intended to use for the development of a new solution concept was actually used to break with promises that were given a long time ago, and believe me, it’s a lot more discouraging to discuss with people that they won’t be able to afford to clean all their water than to create something new. Through many rounds of iteration the locals from our team came up with the concept of a water kiosk named ‘Aguajira’ that uses relatively simple technology and is owned and operated by their locally created water association. Additionally a fund is set up to save for future repairs. 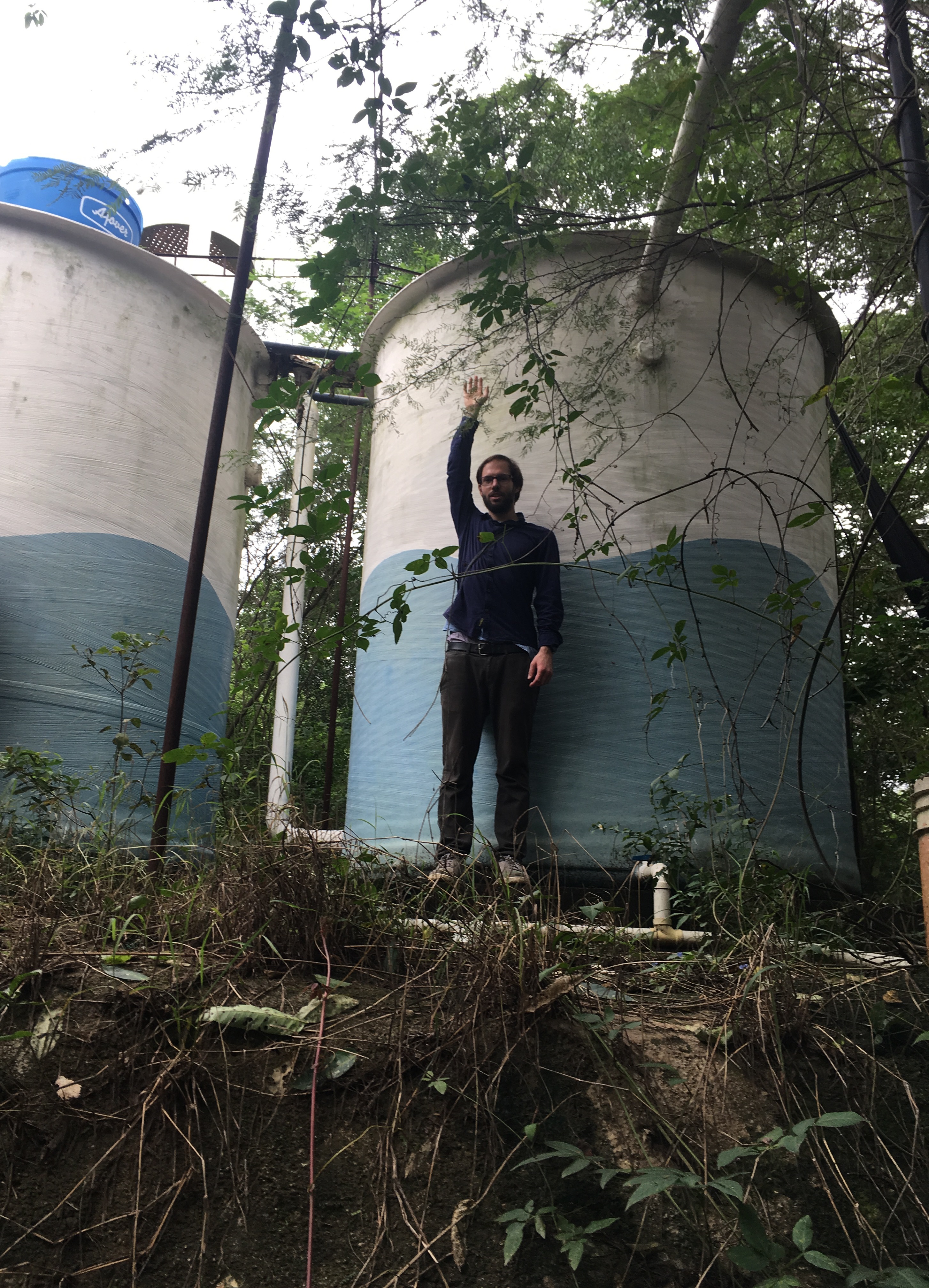 I am almost 1.90 meters tall, just to give you an impression of the dimension of these „elephants“.

The story behind Co-Design and tackling the white elephant

When people ask me what we’re actually doing within the empowering people. Network, I usually explain to them that we work with social purpose organizations around the globe and that our work is actually based on two very simple assumptions. Firstly, technology can help to improve the living conditions of people in need. Secondly, this technology creates employment and sustainable income if we support the social providers of such technology in their countries. Simple as that. Of course, you can’t summarize all our efforts in two sentences, but generally it explains the idea of our work quite well. I firmly believe in the concepts of innovation and growth and thoroughly believe that if mankind focuses more on developing clean energy and reusable waste instead of new 4K high definition televisions, we would be on a good path to shape the world in a way that could accommodate all of us.

Last year I attended the Co-Design Summit of MIT’s D-lab in Naboye Community in rural Zambia to understand how to support social purpose organizations in their implementation of projects in the field. It makes sense to understand what problems people in the rural communities are facing, what their daily struggles are and what the reality of their lives are. In economics they would call it understanding the target market – but it’s so much more than that.

MIT uses this interesting interdisciplinary concept of Co-Design, which isn’t particularly new, but the way they understand it makes it special. Within a summit they create joint groups of international development experts, national experts and locals – who are the real experts. Jointly these groups try to solve one of the community’s problems through interviews, prototyping and feedback collection, all using local materials available. However, MIT sees the process of generating ideas and discussing potential solutions as the essential capacity building for all participants – to exchange and interact with people from other social backgrounds and to try to understand their approaches to solving the problem.

After attending last year’s summit however, I was a bit unsatisfied. Sure, you could try to produce a water pumping system from local materials, but what if existing affordable and repairable systems are a lot more efficient? You could even transport them to the community’s location. Why would you reinvent something that already exists? I get that the creation is part of the capacity building, but if technology is part of the solution, why do we see the implementation failing so many times? Could we co-design an environment or concept around an existing solution to help with its implementation? How do you invent a system of usage without the local population having knowledge of existing solutions? How can you test the technical suitability without creating expectations? After all, you don’t want to artificially raise the requirements on the system.

While (we hope) we were jointly able to develop a concept that could be sustained by the Conejo community, the white elephant actually taught me several things:

Currently MIT’s D-Lab and Siemens Stiftung are collecting the experiences we made during the co-design process around technology – to make them available for a broader audience. Meanwhile the local community is building the house for the ‘Aguajira’ Water kiosk – and we’re all still confident we jointly created a solution that will not end up becoming another white elephant. Let’s hope we can make it work…