Nicolas Mora-Guarda is a recent graduate of the Masters in Management and Technology program at Technical University of Munich, where he specialized in energy access in emerging countries and energy for development. Before his masters, Nicolas already studied and worked in Chile for several years. His trip to Colombia was during his master thesis, where he focused on “socio-economic determinants for the implementation of renewable energy systems in off-grid areas of Colombia” which was supported by Siemens Stiftung. In this blog, Nicolas shares some interesting insights into what he experienced and discovered during this time.

In August and September 2019, I had the opportunity to go to Colombia and immerse myself into the non-interconnected zones (ZNI). Visiting the ZNI made me think a lot about Macondo, a fictitious Colombian town from the book ‘One Hundred Years of Solitude’ (1), which was written using the narrative style ‘magic realism’, characterized by showing things that may be deemed unreal or strange as something common and mundane.

While there, I noticed how things that might seem unreal in our normal life, such as energy black-outs lasting for months, solar power plants built but never used, desolate towns, and illegal armed groups controlling urban areas and vast amounts of territory, among other extraordinary things, occur daily in the ZNI.

The ZNI are regions that do not receive electricity through the Colombian national grid. These regions make up 52% of the nation’s territory (equivalent to the size of France) and have an estimated population of 1,900,000 inhabitants (2), resulting in a population density of 3 inhabitants/km². This low population can be explained by the region’s extremely complex geography; impenetrable jungles, tropical grassland, the Amazon rainforest, the Andes mountain range, deserts, and coastlines along both the Pacific Ocean and Caribbean Sea, shape the landscape in off-grid areas. Given that Colombia is among the most biodiverse countries in the world, with a low, sparse population, bringing electricity to the ZNI has been a big challenge for engineers and policy makers. Since grid extension is very difficult and expensive, distributed generation (a.k.a. decentralized generation) has been the most suitable solution for electrification in these areas.

Unfortunately, and despite having enormous potential for generating renewable energy, the ZNI is almost fully (96%) powered by diesel engines (3). This comes with extreme pollution and high costs. On the other hand, energy generation in the Colombian national grid is largely dominated by hydropower. Additionally, in 2015, the country signed on to be involved in the 17 Sustainable Development Goals (SDGs) by the UN, which includes access to clean and affordable energy. Hence, it is difficult to understand why Colombia has made so little progress in implementing green technologies in the ZNI.

An example of the off-grid areas of El Chocó. (Photo credit: Nicolas Mora-Guarda)

Given the limited amount of time, I was able to visit only three different regions of the ZNI: Amazonas, El Chocó, and El Guainía. Infrastructure in these regions is deficient, or in some cases non-existent, and therefore, the only reasonable way to get there is by small plane. The research trip was an excellent chance to get important insights and relevant information not available in academic literature. It also provided me with a much better understanding of the social dynamics in the ZNI, and in general, the challenges that renewable energy systems face in emerging countries. Consequently, I concluded that the low penetration of renewable energy systems in off-grid areas of Colombia has been caused by socio-economic barriers. These barriers vary and have different levels of influence across regions.

In the case of Amazonas, a hardly regulated monopoly, absent government, lack of coordination between public entities, and corruption have led to three small- to medium-size solar power systems that, since completion, have not generated 1 kWh of energy. Visiting the facilities and seeing hundreds of new solar panels rusting was bleak and shocking. According to conversations I had with local energy experts and authorities in Colombia, there is no initiative aimed to bring these solar power stations to life.

Out of service: A solar system in Amazonas. (Photo credit: Nicolas Mora-Guarda) 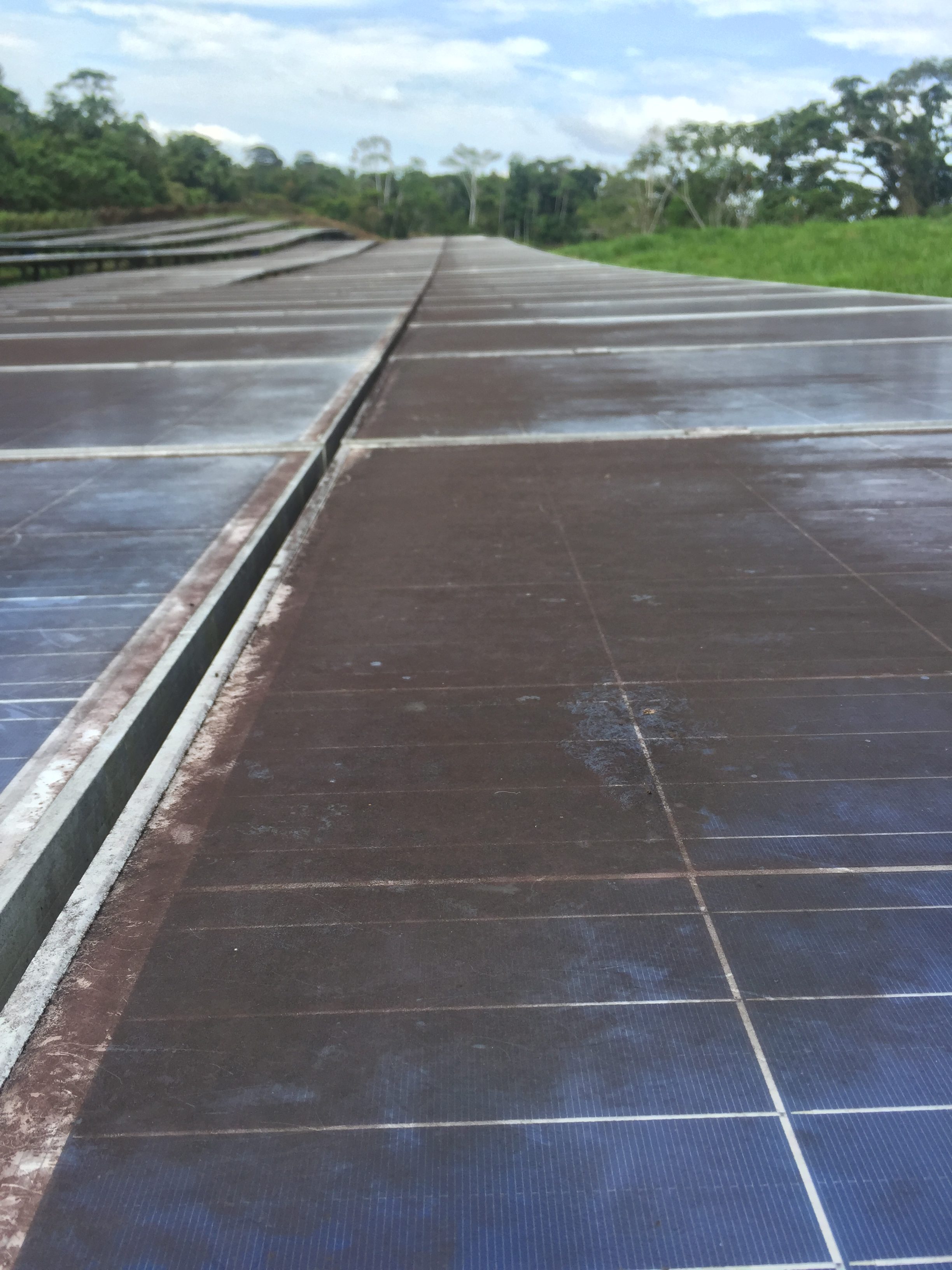 In El Chocó, the situation is even worse. With many people, the first thing that comes to mind when thinking about Colombia is drug trafficking or guerrilla war. News headlines and the recently produced series ‘Narcos’ have played an important role in creating this preconception. Unfortunately, this seems not to be far from reality in the Pacific Region. Drug trafficking and guerrillas are real. They control towns (4), big areas of land and rivers, generate violence, and force displacement, which has turned Colombia into a country with the largest number of internally displaced people in the world (7.8 million) (5). Because of this, little progress has come to the off-grid areas of El Chocó. On top of that, illegally armed groups, such as guerrillas, drug traffickers or illegal gold miners, avoid the establishment of renewable energy systems, since the implementation of these technologies would decrease the diesel provision for the region, which is strongly subsidized by the state. They acquire it on the black market and use it for their own operations.

Finally, El Guainía provided a glimmer of hope for the transition to renewable energy. Here, strong private and public coordination and a well-structured energy market have enabled the construction of a 2.5 MW solar power plant that started operations at the end of 2019. This facility is considered to be an example for the rest of the ZNI. Still, important changes to regulations are required in order to further increase the generation of solar energy in this and other regions.

The non-interconnected zones in Colombia have huge potential to transition from fossil fuels to renewables. However, this will not be possible without political action. Thus, improving the lives of the two million people living in the ZNI will depend on policy makers and their commitment towards these regions. At the end of the day, it is in their hands to take magic realism back to the books and bring dignity to these communities after all the suffering they have gone through.

(1) “One Hundred Years of Solitude” (1967), by Nobel Prize in Literature winner, the Colombian Gabriel Garcia Marquez, is commonly considered as the masterpiece in the genre magic realism. It tells the multi-generational story of the Buendía family and takes place in Macondo, a fictitious town in Colombia.