Holacracy! A turnkey system for self-organization. Looking at multinational corporations like ENGIE to SMEs like the BoP innovation Center or Springest, I have had the privilege to be both an observer of the implementation of Holacracy and a first-hand user at the BoP Innovation Center where I was working. Despite a fair bit of criticism (mine included) received over the years, I do think that Holacracy has a role to play in the ecosystem of actors dreaming to improve engagement of employees. Let explore this together!

Holacracy is fundamentally an operating system to support the implementation of self-organization. It is based on a strict distinction between:

By separating and providing clarity on roles and power structure, people are able to make decision in the roles they are empowered with. Holacracy is governed by very strict processes. They allow roles to change dynamically and tensions on these roles to be processed efficiently. If you want to see what the diversity of roles can be in an organization, roles at Springest, an independent comparison website for training programmes and courses, are available online for anyone to see (http://roles.springest.com/). So instead of functions, people cumulate roles.

Various organizations have ventured in using Holacracy. From the most iconic ones like Zappos in the US to more unconventional ones like the Lausanne Business School in Switzerland or the Social Innovation Academy in Uganda.

As mentioned I have been following for a while companies like Springest or ENGIE using continuously Holacracy with renewed satisfaction. I also was part of its implementation at BoPInc.  However, at BoPInc, Holacracy was almost completely abandoned after 2.5 years of use.  Looking at these experiences, several clear learnings are appearing.

On a positive side of the story, Holacracy does bring clarity on who is deciding on what in a company by bringing a lot of transparency on roles and accountability. Its process of dealing on weekly basis with tensions is also great to have focused meetings. It really allows to deal with what is important. So, Holacracy proposes a number of building blocks to create a big bang towards alternative management practices, Eventually leading to more autonomy and engagement in the work space. By the way, it is not statistically proving anything but most of the organizations I know using Holacracy successfully are companies with a strong digital/IT culture. 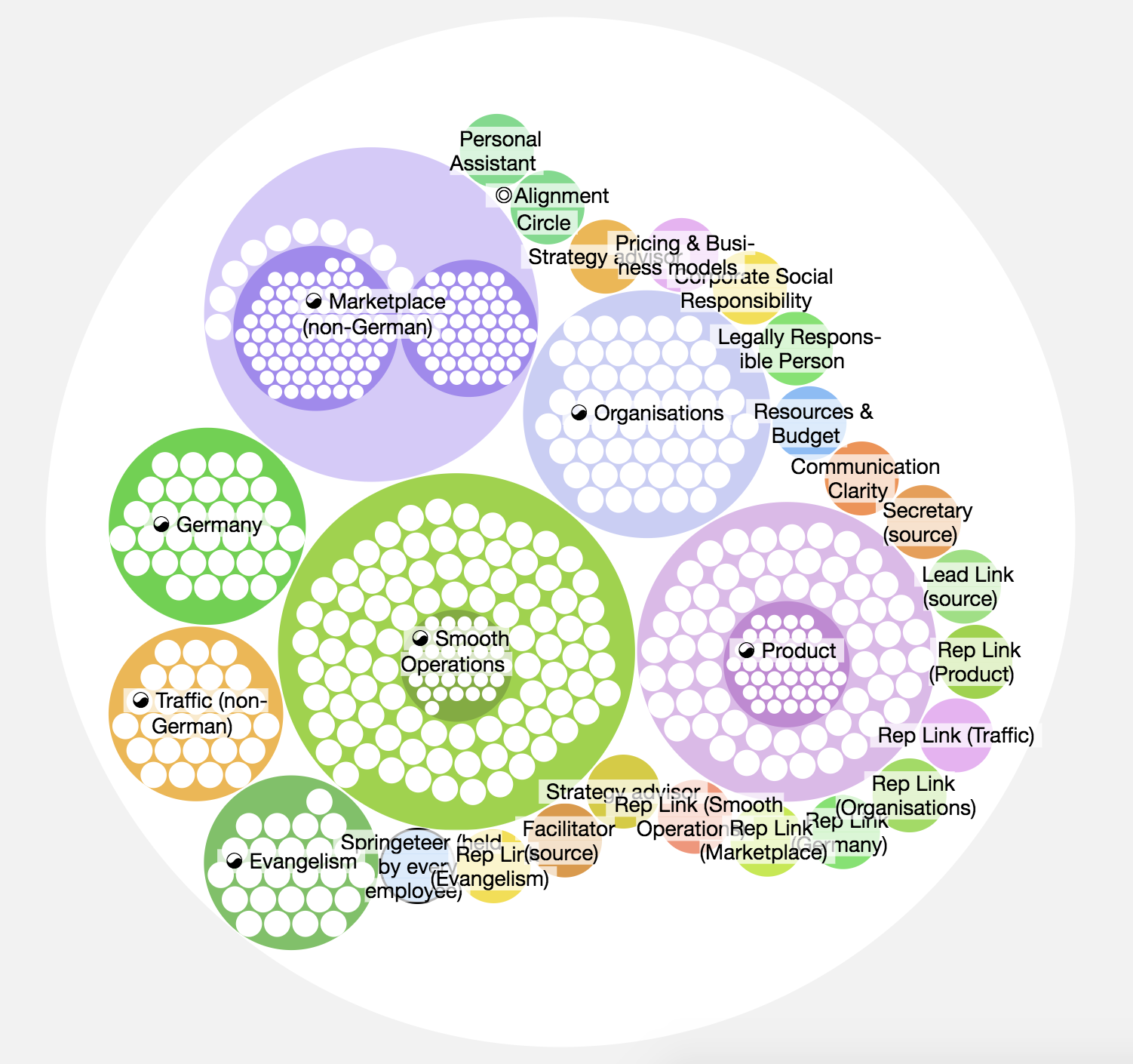 Holacracy works with circles and roles instead of functions

Looking back at the implementation of Holacracy at BoPinc, there are however two points where Holacracy falls short. The first one is, when implemented in existing organizations, it is not a chosen set of rules. It is an imposed set of rules. One (or a few) person(s) might decide to use it but often the rest is on boarded. So, there is automatically a gap between what people could have wished to implement and what they got. Used as a big bang implementation (all or nothing, and for the latter you are welcome to leave the company like at Zappos) is certainly not the way to go in my opinion to ensure acceptance of new management practices. In other word, it is not an organic growth of an organization but more a cutting that eventually would replace the initial plant.

Furthermore, Holacracy has a strict set of rules and its own bureaucracy. Bureaucracy in essence is not bad as long as it has a purpose for the common goods. But to stick to these rules, it may take, for some, years as we are talking about human/leadership evolution here. And Holacracy does not (nor does it claim it will do) turn an autocratic leader into a servant one overnight. Some companies remedy to this issue but putting in place schools of leadership alongside the Holacracy implementation. These additions help to support the developments of skills needed to work in a more autonomous environment.

But eventually, this gap in what people want and can do, and what Holacracy requires creates over time a tiredness towards the operating system. Which led at BoPInc to completely drop it. Luckily, this issue is also an opportunity. Holacracy can create an interesting base (transparency, more ownership on accountability, constant changes in role) towards more engaging work environment. After an initial phase (2-3 years), the operating system can be upgraded with lessons learnt. Then one should move away from the fixed set of rules that Holacracy provides to its own. In other words, let evolution do its work without dogma.

As a first step to make up your mind about Holacracy, I would encourage to register to a safari at Springest where you can see live the way they use the system. Curious to hear your impressions!